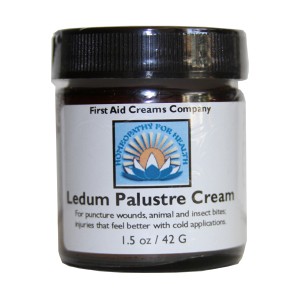 The genius of Ledum lies in its effects on puncture wounds, animal and insect bites, and in certain rheumatic or arthritic conditions, and for the pain of gout. When Ledum is needed the painful part feels better with ice cold applications. If the person has stiff joints, they will loosen up with cold applications. Another striking characteristic of Ledum is that in rheumatic or arthritic conditions the pain begins in the extremities and extends upward. The pain is also much more severe in the lower limbs. In painful wounds the pain originates at the sight of the wound and ascends. Ledum can also help with painful abscesses that are better with cold applications. Please watch the slide show on the website to learn about conditions that Ledum can help with.

Please go to the Learn About Ledum Palustre Page to see a slide show about this product and learn about its uses.

Instructions for use:
Apply locally. Rub in well. For external use only. Keep out of the reach of children. Discontinue if skin irritation results. Not intended to prevent, diagnose, treat, or cure any disease.

"Whatever you can do or believe you can do, do it! Boldness has genius, power and magic in it."
Goethe

"Work is love made visible."
Gibran